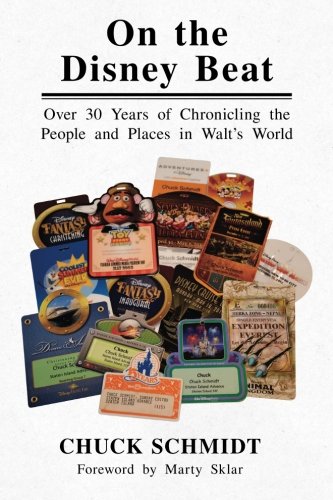 Journalist Chuck Schmidt has covered Disney for over three decades, attending lavish special event parties and enjoying access to Disney executives and Imagineers. He was first in line for new attractions, shows, even cruise ships. What's that like? Chuck's memoir tells all.

Being a newspaper reporter is not a life of glitz and glamour. But for a reporter like Chuck Schmidt, who was on the "Disney beat" for the Staten Island Advance, it means one-on-one time with Disney Legends like Marty Sklar and Tony Baxter; admittance to private, after-hours galas in the parks; and plenty of bling.

Now retired, Chuck tells the never-before-told story of how he and other journalists publicize the latest and greatest from the Mouse, taking you backstage to a side of Disney that guests never see:

With a foreword by Marty Sklar, and featuring exclusive photos and contributions from Disney Legends Sklar, Tony Baxter, Bob Gurr, and Charlie Ridgway, On the Disney Beati> is your personal press badge to all things Disney!