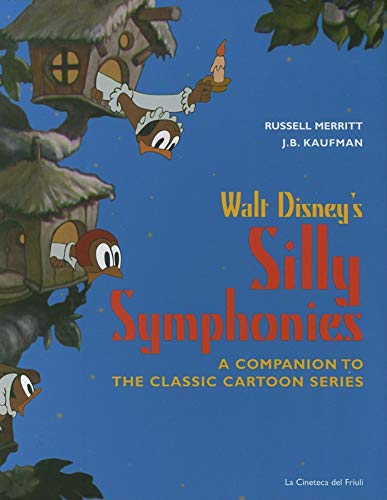 Launched by Walt Disney in 1929 as a "musical novelty" series to complement his recent success with Mickey Mouse, the Silly Symphonies soon became much more. This line of delightfully innovative, animated cartoons ran for ten years and produced such classics as Three Little Pigs, The Tortoise and the Hare, Music Land, and The Old Mill. Silly Symphonies won every Academy Award.

From the authors of the prize-winning Walt in Wonderland: The Silent Films of Walt Disney, this richly illustrated volume is a complete history of the Silly Symphonies including detailed entries for all the Symphonies along with a lengthy critical analysis and production history of the series.

From Leonard Maltin's Movie Crazy, Leonard's Pick
"With perfect timing, Indiana University Press has taken on distribution of this valuable (and beautifully-printed) book, just as the second volume of Disney's Silly Symphonies cartoons has become available on DVD as part of my Walt Disney Treasures series. In truth, Merritt and Kaufman have been working on this definitive compendium for years... but it was well worth the wait...Every short is exhaustively chronicled, with information you will find nowhere else: when it went into production, who animated each individual shot, how much it cost to produce, where it debuted, and much, much more. No detail has gone unexplored...What's more, the book is beautifully designed and filled with rare illustrations in both black & white and color." - (2/23/07)