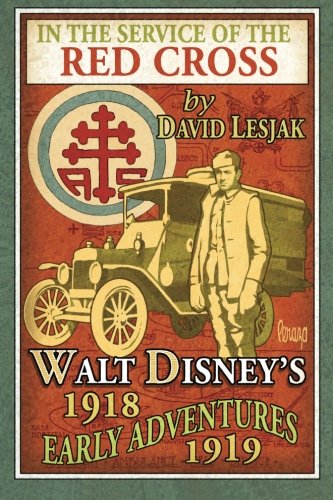 Walt Disney embarked upon his first great adventure when he joined the Red Cross and was shipped out to war-torn France, where he had his first drink, drew some of his first cartoons, and narrowly avoided court-martial. It was a coming of age for an under-aged Walt.

With World War I raging in Europe, Walt wanted to follow in the footsteps of his older brother Roy and enlist. But he was too young. The Red Cross needed drivers and wasn't so picky about age. With his mother's permission, and a clever forgery, Walt became a driver for the Red Cross in France, an experience that closed his childhood and put him on the road to the man he would become.

In David Lesjak's engagingly written, extensively researched "In the Service of the Red Cross", you'll learn about this little-known time in Walt Disney's life:

It’s a side of Walt you’ve never seen, before Mickey, before the fame, when he was just a doughboy named Walt Disney.