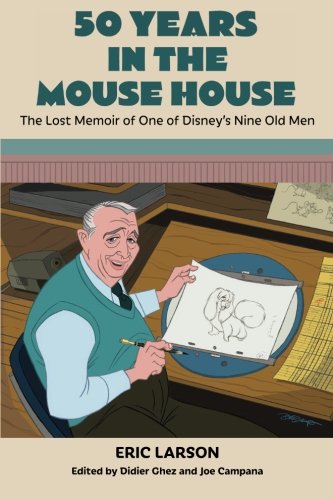 The Studio Life of a Disney Legend

Eric Larson, one of Walt Disney's famed "Nine Old Men", went to work at the studio in 1933 and left in 1986. He knew everyone at Disney who was anyone, and he kept a diary of the personalities, the pranks, and the politics. This is his warm, witty story.

In June 1933, young Eric Larson sent some of his sketches to the Disney Studio. A man named Dick Creedon liked what he saw and hired Larson as an inbetweener, the bottom of the pole at Disney, but that didn't last long. Soon, Larson became an assistant to top Disney animator Ham Luske, helping out on Fantasia.

From there, Larson met and worked with the very best at the studio, including Walt himself. Later, he gave a series of lectures on animation and established a talent program which brought new generations of gifted animators into the Disney fold.

In addition to Larson's memoirs, 50 Years in the Mouse House contains:

Enjoy this unique, entertaining, and educational perspective on the Disney Studio by one of its greatest talents!