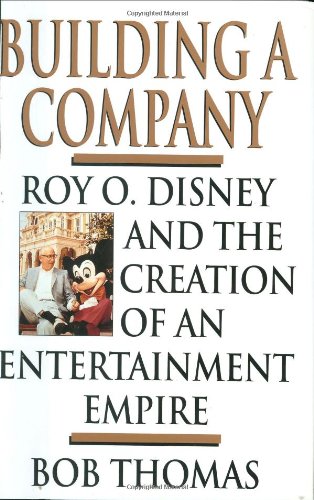 One night, at a Los Angeles dinner gala, Walt Disney gave a rare public statement about his older brother, Roy: " We started the business here in 1923, and if it hadn`t been for my big brother, I swear I`d`ve been in jail several times for checks bouncing. I never knew what was in the bank. He kept me on the straight and narrow. " Although Walt wasn`t quite that ignorant of the numbers, it`s true that Roy handled most of the finances for the Disney empire. It was Roy who kept the studio running in the early years, Roy who put together the financing deals for Disneyland, Roy who oversaw the completion of Walt Disney World in Florida after his brother`s death in 1966.Building a Company provides plenty of anecdotal details about the Disney entertainment empire`s rise to power. Don`t look for juicy scandal, though: Bob Thomas`s fully authorized (and, ultimately, Disney-financed) biography steers clear of any controversies, such as Disney`s attempts to get out of a contract with ABC in the late `50s, before they can cause a blight on the success story. Useful primarily to those interested in the details of business and entertainment history.