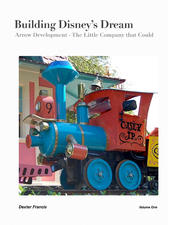 The story of Arrow Development, who began as a humble machine shop in then sleepy Mountain View, CA and grew to become the builder of many of the first ride systems for Disneyland and then the largest and most successful amusement ride builder in the world. Building Disney’s Dream completes and compliments Robert Reynolds 1999 book with additional details, background and stories on Arrow's other founders and owners, like Walter Schulze the Wharton MBA who made them profitable, and the later years in Utah, when Arrow Dynamics was caught up in the Coaster Wars which drove rides and riders literally to their limits and eventually led to Arrow’s demise.