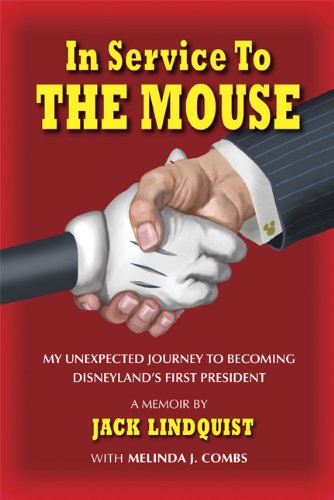 Jack Lindquist enjoyed the ballet with the Shah of Iran, convinced Gene Autry to sell the Anaheim Angels to The Disney Company, and was gently reprimanded by Imelda Marcos.
Throughout his thirty-eight year career with The Disney Company, starting out as the first advertising manager of Disneyland just months after its opening to ending his career as the first president of the park, Jack took risks — some successful, some not so successful — but always with his characteristic humor and joie de vivre. Disneyland and Walt Disney World serve as the backdrop for Jack’s experiences, as he established himself as a maverick and helped form a large slice of Americana dominated by Disney. When Jack wasn’t rubbing shoulders with the movers and shakers of every decade that he worked for the Disney Company, he was busy creating Disney Dollars and Date Nite. He recounts all of this and more, including his humorous mistakes, in his touching memoir, "In Service to the Mouse."